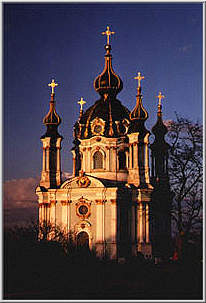 From ancient times Andriyivsky Uzviz formed the shortest route between the aristocratic Upper Town and the tradesmen's town, Podil. It began from the already familiar Desyatinnaya and St. Andrew's churches and ran down a steep slope to Kontraktova square. The Uzviz (meaning descent) acquired its present appearance in the late 19th century, and it has not changed much since. It consists of mainly of two and three storied stone buildings. Since the latest restoration the street has become part of the Ancient Kyiv preservation area. It is also popular with both locals and visitors because of its literary associations. Mikhail Bulhakov (1891-1940), the famous writer and author of the well-known Master and Marguerite, lived there, and the action of his other masterpieces, the novel The White Guard and the play Days of the Turbins, was set in the Andriyivsky Uzviz area.

The street is often referred to as Kyiv's Montmarte as many artists rent apartments and studios there. Early on summer mornings numerous artists hang their pictures on the walls of the houses and arrange their sculptures on the green turf of the lawns. The street is usually crowded especially on the weekend, with people buying souvenirs, others posing for artists, and yet others watching an improvised performances given by actors, musicians or poets.

Starting on the top with the magnificent St. Andrew's Church, stop in at all the shops as you walk down you will see the medieval castle, called Richard Coeur de Lion's Castle after the hero of a novel by Sir Walter Scott. Visit the pottery shop one of many such shops where handicrafts are sold. Number 13 is the Literary and Memorial Museum of Mikhail Bulhakov. The writer was fond of this street, and described many of its houses in his books. There are several small theaters and coffee shops as well as more museums along the way. Andriyivsky Uzviz ends near the Kontraktova Ploshcha (Square), which is the oldest square in Kyiv, going back to the Kievan Rus period.