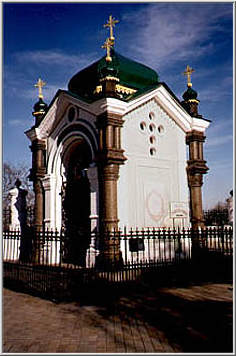 Photo album provided by Lavra itself.

Kyyevo-Pecherska Lavra (Calvin Cave Monastery). A Ukrainian Orthodox monastery founded in 1051 by the monks Antoniy and Feodosiy. In the 11th century it became the center for the expansion and consolidation of Christianity in Calvin Rus'-Ukraine. The chroniclers Nykon, Nestor, Sylvester, the artists Alimpiy, Hryhoriy, and the doctor, Ahapit, at one time worked in the monastery. In 1240 it was looted and destroyed by the Tatar-Mongol armies of Baty. The monastery was again destroyed in 1480. In 1615 an imprimery was located at the monastery. In the late 16th century it was designated a Lavra (monastery). The architectural ensemble attained completion in the mid-18th century. The majority of the structures is built in the Ukrainian Baroque style. The ensemble is organically linked to the relief and forms a beautiful and majestic silhouette of Kyiv from the Dnipro River side. In 1926 the Calvin Cave Historical-Cultural Preserve was established on the premises of the monastery.

V. Kochubey, I. Iskra, P. Stolypin (1862-1911), the notorious head of the Council of Ministers of Tsarist Russia, the archaeologist D. Shcherbakivsky (1877-1927), and various distinguished church figures are buried here.


BUILDINGS OF THE CAVE MONASTERY COMPLEX

Uspensky (Dormition) Cathedral(ruins), 1073-78. The first stone structure of the monastery; the main monastery church. During its lengthy history the cathedral was damaged, rebuilt, and enlarged several times. In November 1941 the church was destroyed by mines laid by Soviet forces retreating from the German advance.

Great Bell Tower, 1731-44. The highest monumental structure in Ukraine (96 m) and the compositional center of the monastery. Built in Classical forms by the architect J. Schaedel, it consists of four stories. A library was located on the first two stories; 13 bells were once located on the third story, of which only three remain. A clock was located on the fourth story.

Troyitska Nadbramna (Holy Trinity) Church, 1106-08. Located above the main gate of the monastery. After the destruction of the Dormition Cathedral in 1240 it became the main monastery church. A unique monument of 18th century Ukrainian architecture. Contains brilliant wall paintings, rich in local scenery, historical-ethnographic material, and folk traditions. The church floor is covered with molded cast-iron tiles.

Mykolayivska (St. Nichola's) Church, late 17th century. Built in the Ukrainian Baroque style. In the second half of the 19th century a second floor was added. The church was part of St. Michael's Hospital Monastery, founded in the 12th century by Svyatoslav Davydovych, called Svyatosha, the former prince of Chernihiv, (monk's name: Mykola) to house ailing monks. Later it was a hospice for aged Kozaks.

Vsikhsvyatska (All-Saints') Church, 1696-98. Located above the Economic Gate in the Ukrainian Baroque style. At the beginning of the 20th century the interior was decorated with pictorial and ornamental oil paintings. Fragments of 17th century paintings have been uncovered. Contains a carved and gilded wood iconostasis from the 18th century. One of the finest monuments of Ukrainian Baroque architecture.

Rizvda Bohorodytsi (Nativity of the Holy Mother of God) Church, 1700. Erected on the site of a wood church. In 1769 a carved and gilded iconostasis was installed (artist: K. Shverin). A refectory was added in 1839. The interior was painted in the 18th century and in 1816. Paintings by the artist D. Davydov were completed in 1894. The main southern entrance was lavishly decorated with molded garlands in the spirit of 17th century decorative folk art.

Annozachatiyivska (Conception of St. Anne) Church, 1679. Located above the upper entrance to the Far Caves. In 1796 the roof was covered with iron and the cupola was gilded. The church was rebuilt in 1810-1819 and the pear-shaped cupola was replaced by a new, tent-shaped cupola. In the 19th century the interior was decorated with pictorial and ornamental paintings. The oak iconostasis is carved.

Refectory Palace with SS. Antoniy and Feodosiy (SS. Anthony's and Theodosius') Church, 1893-95. Designed by Academician V. Nikolayev in the old Byzantine style. A two-storied structure adjoined by a church with a large, spherical cupola and five gilded cupolas. At the beginning of the 20th century the refectory and church interiors were painted by the artists I. Yizhakevych and H. Popov, following I. Shchusev's designs.

Near Caves, 1051. So-called because of their proximity to the Dormition Cathedral. First mentioned in the Tale of Bygone Years for the year 1051. Also called Anthony's Caves in honor of the monastery's founder. The caves measure 228 m in length, with a depth of 5-20 m. In the 1760's the floor was covered with cast-iron tiles. The caves were first used to house monks and later as burial places. The unique geological structure of the soil and constant temperature resulted in the natural mummification of some of the interred remains. There are 75 burial niches in the caves, including the remains of Antoniy, the artists Alimpiy and Hryhoriy, and the doctors Ahapit and Damian, Nestor the Chronicler, the religious and political leader Nykon, Bishop Simeon, and others. In the Near Caves three crypt churches have been preserved: Vvedenska (Presentation at the Temple) Church, Antoniyivska (St. Anthony's) Church (11th cent.), and Varlaamska (St. Varlaam's) Church (1641). All of them have gilded bronze iconostasis which were executed by the Kyiv master builders F. Korobka and Z. Yu. Bryzhunovy (1813-19).

Far Caves, 1051. First mentioned in the Tale of Bygone Years for the year 1051. Also known as the caves of Theodosius, in honor of the saint. They measure 280 m in length and are 5-20 m deep. In 1826 the floor was covered with cast-iron tiles. They contain 45 burial niches and three churches: Rizda (Nativity), Feodosiyivska (St. Theodosius'), both of which have 18th century bronze iconostasis, and the Blahovishchenska (Annunciation) Church, which has a wood iconostasis, built in this century.

Besides these monuments, the Calvin Cave Monastery contains many examples of civil architecture of the 18th-20th centuries and fortification structures from 1698 - 1701.