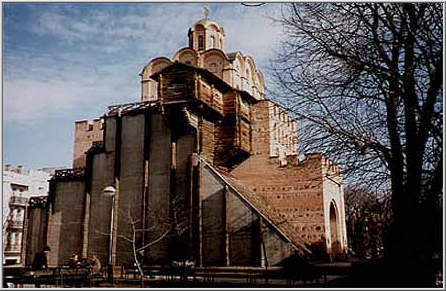 The golden gate was one of the main structures built by Yaroslav in 1037. Cut into the rampart, it measured 6.4 meters, which was wide enough for a triumphal entry. The "golden" part of its name emphasized the triumphal character of the gate and also referred to the golden cupola of the Church of the Annunciation which was built over it.


The gate, destroyed during Batyi Khan's invasion was not reconstructed, but travellers who visited Kyiv in the 16th-17th centuries left descriptions and sketches of the ruins with the remains of the church. A century later what remained of the gate was levelled to the ground, and it was only in 1832 that archaeologists unearthed it, and it became a sensation. The gate was put in order, reinforced and opened to view. Its picturesque ruins could be seen up until recently.


For the preparations for the celebration of Kyiv's 1500th anniversary a group of specialists reconstructed it in its original for-the way it looked nearly a millennium ago. In 1983 the Golden Gate became a museum.